Third category
– most of the collagen fibres have ruptured, near complete tear
– severe pain
– joint is completely unstable
–
Factors affecting the Mechanical Properties of Ligament

In one study, the ACL was found to exhibit age-related changes. The young (16-26 years) adults’ are considered to be 3 times stronger than those of older adults (48-86 years), 1.7 times for the elastic modulus i.e. stiffer and 1.5 times for failure strain i.e. ultimate load (Panjabi and White, 2001).

Factor: Activity, Exercise and Disuse
Activity/ Exercise
Ligaments appear to remodel and become stronger and stiffer when there is mechanical demand on them (Noyes et al, 1974). Physical training improves the tensile strength and also the ligament-bone interface (Woo et al, 1983). Daily activity is sufficient to maintain 80-90% of a ligament’s mechanical potential. It has been found that injured ligaments that are exercised have significantly better physical and biomechanical properties than those not exercise (Nigg and Herzog, 1999).

Disuse/Immobilisation
In contrast, immobilization and disuse, decreases the tensile strength and stiffness of ligaments. In a study by Woo et al(1987) on rabbit knee, after 9 weeks of immobilization there was a corresponding 69% decrease in ultimate load and an 82 % decrease in energy to failure. Biomechanically, the water content decreases, collagen mass is reduced whilst the number of cross-links is increased and the ligament becomes stiffer.

Immobilization has a more immediate and substantial effect compared to effects of exercise. Upon remobilization, the effects of immobilization are reversible but considerable time will be needed to regain the former strength and stiffness. Noyes (1977) experimented 8-weeks immobilization on animal ligaments and found that 12 months of re-conditioning was necessary before it was comparable to initial values.

Factor: Pregnancy and Postpartum Period
Rundgren (1974) reported that the decreased stiffness of tendons and ligaments during early postpartum was restored later.

Factor: Ligament differentiation- Properties
-Though ligaments follow a general stress-strain curve, the diagram below demonstrates that different ligaments exhibit different degree of stiffness and elasticity, hence different failure properties to injury. Posterior Longitudinal ligament is the stiffest and the most flexible ligaments are interspinous and supraspinous ligaments (Panjabi and White, 2001).

-Differences exist between ACL and MCL in their biologic responses during its midsubstance injury. MCL heals quickly and predictably even without repair whilst ACL fails to establish a significant healing response even if direct repair is done. There are ultrastructural differences. The cells of MCL are similar to those of fibroblasts (synthesis of collagen) but the ACL resemble fibrocartilage cells.

Factor: Diabetes Mellitus
Diabetes Mellitus is a disturbance of the normal insulin mechanism. When compared to nondiabetics, diabetics show a higher rate of tendon contracture (29% vs 9%), tenosynovitis (59% vs 7%), joint stiffness (40% vs 9%) and capsulities (16 % vs 1 %). 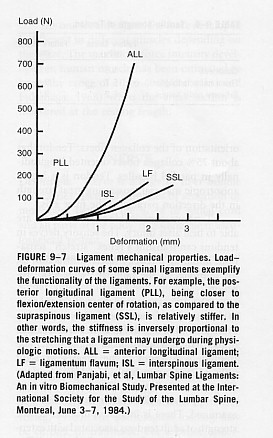