Human development begins with fertilization of an ovum. But between this initial contact and birth a series of complicated changes occurs. This involves both differentiation and reorganization of cells to form the different tissues, organs and organ systems to create a viable individual.

Immediately after fertilization the zygote undergoes repeated mitotic divisions, resulting in a ball of cells. When the cell has divided into a mass of sixteen cells (Now called the Morula) it enters the uterus wall. Differentiation continues so cells within the Morula are labeled depending on their position and function.

Simplification of the cell structure can label these into three zones: The Ectoderm, Endoderm and Mesoderm (Palastanga et al 1994).

The Ectoderm gives rise to the skin and its derivatives and the central and peripheral nervous system. The Endoderm forms many epithelial tissues of the body which lines many major bodily systems, e.g. Digestive and respiratory tracts. The Mesoderm forms various structures including the dermis, circulatory system, bone and cartilage.

The Mesoderm also gives rise to many specialist cells including Mesenchymal cells. These cells differentiate and specialize again to form the soft tissues, bones, muscles and nerves of the body. 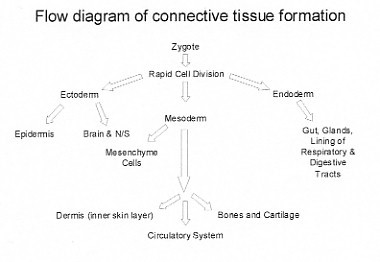 Adapted from Gray’s (1995), these structures of the neuromusculoskeletal system can be divided into three distinct subgroups of Mesenchymal cells:

Firstly paraxial mesenchymal cells are responsible for the development of the vertebrae, portions of the neurocranium and axial skeleton. All voluntary muscles throughout the head, trunk, limbs, and the dermis of the skin.

Finally the somatopleuric mesenchymal cells give rise to the skeletal elements, ligaments, tendons, fascia, muscular and dermal connective tissue throughout the trunk and limbs. These specific mesenchymal cells also pattern the development of nerves, muscles and blood vessels in these locations. 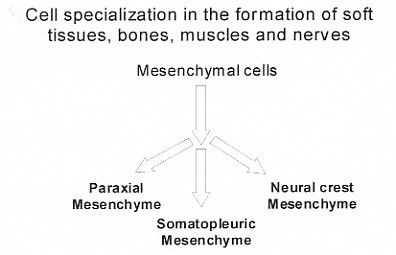 Movement of cells populations (morphogenesis) and differentiation involves cells and tissue interactions in the early embryo. The process is known as (Gray 1995)
induction.

It is a complicated stage where the induced tissue may change or both tissues involved also may change in various combinations.

In Human Function and Structure,(Luciano 1978) cells, in fact, multiply, migrate and specialize, forming layers which can fold, fuse, separate and elongate in order to shape the human body. Other cells, which have not undergone cell differentiation, are known as stem cells. Some other undifferentiated cells can remain and multiply in the various organs where, under an appropriate stimulus, may then go through a delayed differentiation into a specialized cell type.

At the stage of fertilization every cell in the growing embryo receives an identical set of genes some of which are either turned off or on (i.e., from messenger RNA and the corresponding protein). Cell differentiation depends on the above mechanism suggesting a quantitative as well as qualitative control of gene expression.

Two types of interactions are described (Gray 1995): Permissive and Instructive; in a permissive interaction the signal between the apposing tissue and the responding tissue does not influence the developmental pathway selected. The responding tissue has the intrinsic capacity to develop and to express this capacity it only needs the appropriate environmental conditions.

Permissive interactions are often more common in a later stage of the development where the pre-determined fate of some tissue is only maintained and stabilized by another.

An instructive interaction changes the cell type of the responding tissue.

Condensation, (Hall BK 1992) is described as the first cellular product following tissue interaction and they are attributed a pivotal role in initiation of the vertebrate skeleton in embryonic development and in the modification of skeletal morphology during evolution.

Therefore, particularly important are the interactions between Epithelial and Mesenchymal cells during embryonic development, which take place in a reciprocal manner. These spatial, temporal sequential interactions both permissive and instructive leading to the differentiation and morphogenesis of most tissues and organs are termed epigenetic cascades.

It is recognized (Rogers 1983) that different signaling patterns take part during cells differentiation, influenced by size, shape, spacing, orientation and activity of many thousands of cells, each behaving in a reproducible way that is appropriate to its position in the tissue or organ concerned. The simplest way in which one cell can influence another is the release of some signaling molecule into the extracellular fluid. However, there are other ways to make sure that communication is transmitted and the following classification is an example:
Direct cell-cell contact;
Cell adhesion molecules;
Extracellular matrix and their receptors;
Growth factors and their receptors;

Tendons, ligaments and aponeurosis for example are the result and a combination of few cells and large amount of non -cellular material named matrix, produced by the cells. It is, in fact, the matrix the element that gives the various types of CT a different structure and function also.
Generally speaking CT has two functions:

Mechanical support, concerned with providing strength or elasticity as in binding together the cells of the body, supporting various organs and holding them into place, providing shock absorption and flexible links between bones and transmitting muscle forces.